Inspriration does come from everywhere!

These paintings by Jeanne Young capture bakery life at it's most realistic... 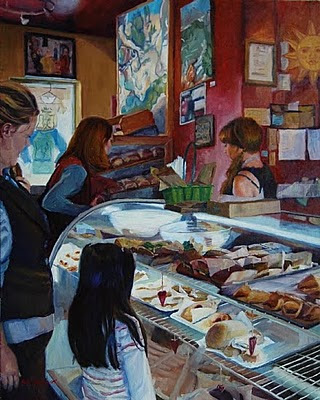 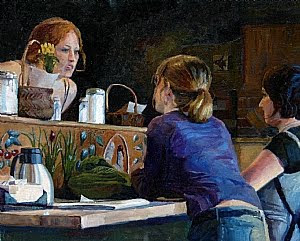 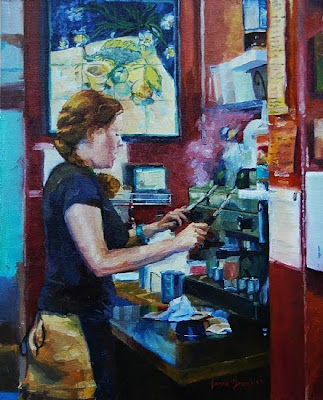 interestingly enough, we had NO idea!
Posted by Carri at 11:00 PM 3 comments:

a little cocktail from my valentine 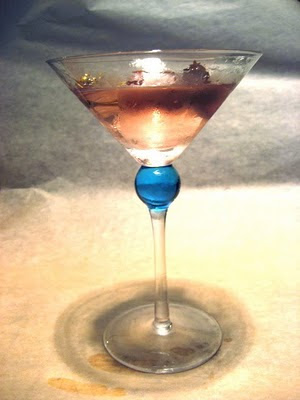 I just have to share my valentine gift from my husband, who just so happens to know what I like.
Behold, the Valentine Martini:
2 parts gin (in this case a small batch called 'Dry Fly' from Washington)
1 part kalamata olive juice
pour over ice in shaker and shake until outside of shaker feels ice cold
strain into a VERY COLD martini glass (these are from our good friend Barb Scalzi at North Wind Home Collection)
garnish with as many olives as will fit on the cocktail skewer...then sit across from your favorite valentine and enjoy.
make sure your close enough to play footsie, that's the best.
Posted by Carri at 10:17 PM 1 comment: 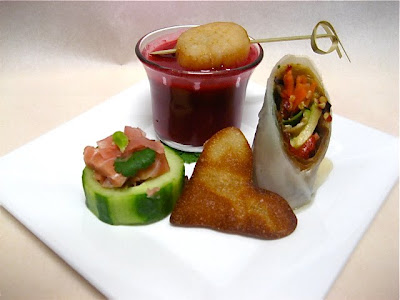 The Homer High School Nordic Ski Team holds a fancy dinner fundraiser every season. In the past few years it has been headed up by my friend and mentor Sean Maryott and Diana Carbonell. It's always been a very well put together event with a reputation for really fine food. Last year I was honored when they asked me to help out, but the jig was up by the end of the night. As we were packing up and basking in the glow of a job well done, Diana, with a playful twinkle in her pale blue eyes, taps me on the shoulder and says "Tag, You're it!" I knew it, I was being chosen. To say I was flattered is an understatement. I was also scared to death! I know they were really ready to pass this one along, Sean's daughter Gillian had graduated the year before and my kids were just coming up in the program, so picking a new crew made sense...and when I thought about it, I realized it was just the challenge we were looking for. I say we because right after being given the job, I shared it with my colleague, Ryan Lee. Ryan and I had been talking about pulling together a dinner almost ever since he came to work at the bakery. He is the kind of creative and capable cook who can make you believe anything is possible. (I really like that in a person) While his 10 gauge earrings and mulitiple tattoos may take some folks time to get used to, the minute he starts cooking for you with deft hands and kind demeanor, even the most critical warm up and relax. (I really like that in a person, too) When the time came, the committee contacted me this past fall to say they wanted to do a valentine dinner this time. We went to work on the menu right away...though it took a while to finally come together, we came up with a set of flavorful, seasonal dishes that could be produced within the constraints of our budget and the space. We also recruited Melinda Zox-Rubino who has been helping us at the Bakery this winter (she runs Silver Fox Lodge in her copious spare time!), and the ever efficient Brianna Bryngelson, painter extraordinaire, to help with the cooking and plating. Held at our friends Pauli and Harmon Hall's beautiful post and beam 'barn' (they are also owners of the Quiet Place Lodge in Hailibut Cove...such a lovely spot!) it has a wonderful kitchen and an amazing view, one of my favorite venues ever. The food came together beautifully...it was so much fun, we look forward to doing it again next year...right guys?
The Salad:
Spinach with blood orange, candied almonds and warm balsalmic vinaigrette and sesame rice cracker 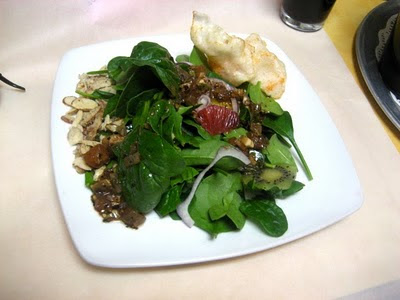 (my son charles saw the picture of this and said it looked too messy, I agreed, but I do think he's been reading the Alinea cookbook too much!)
Unfortunately, it was too busy at entree time to get a shot of the main course...my bad. I was too proccuppied over saucing the first plates, so we had to scramble for enough sauce for the last plates, the one glitch in the night for me.
It was a play on 'surf and turf':
Pan roasted Cod with honey mustard crust, with a skirt steak skewer over a wild mushroom risotto all dressed with a miso-herb buerre blanc....again, sorry no photo!
I did manage to capture dessert, though:
Baby Boca Negra with creme angalise (thanks Ruhlman) and pomegranate jelly 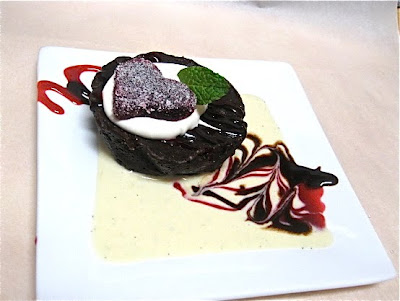 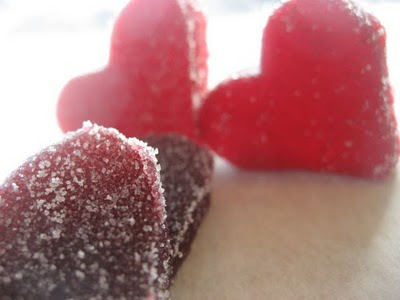 I've been wanting to make Jellies for quite some time, but for whatever reason, never quite got around to it. But now, as valentines day approaches, I finally got that 'round to it' (thanks, GC)...and decided this is the year. We are doing a special dinner for the high school ski team on saturday, i thought this would be the perfect thing to add to the dessert course. As is par for me when doing something I've never tried, it took a few attempts before I got it right. First off, I had to find a formula. In looking through my cookbook library, jellies were way underrepresented. So, I go to my computer...a google search brings up a recipe by fellow Alaskan, Kirsten Dixon...who's work I admire and who also happened to be staying upstairs in our B&B! She and her husband are the new owners of Tutka Bay Lodge and they were down for some midwinter chores. I knew then that I had found my recipe. At home that evening I pulled some berries out of the freezer and followed Kirstens directions. I took the pan off the heat with 5 minutes of cooking time to spare, not being completely sure how thick the mixture should really get. I left them to set overnight and the next morning, they were almost right. I could cut and sugar them, but they were still a little on the soft side. The next batch I decided to use the pomegranate juice you can buy at the store in bottles. I really wanted that jewel red color. Knowing there wouldn't be much naturally occurring pectin in the juice, I upped the amount called for and cooked the mixture until it came close to being as thick as the last batch. The only problem was it took almost an hour of stirring on the stove and in the end, they were even softer than the first ones. So, that means I need more pectin...maybe adding some cranberries, I happened to have a bag of fresh in fridge, so I mixed it with the rest of the jarred juice and went at it again. This time, it thickened up nicely and the next day I was able to cut and sugar them with ease...the only thing was the cranberry completely overwhelmed the pomegranate (of course). So, I turned to my old friend, the raspberry...just the right complement. It turned out to be a perfect pairing. 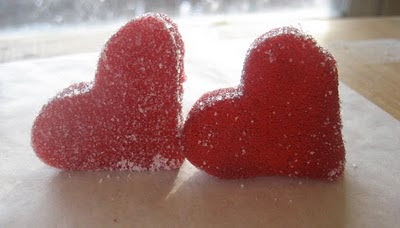 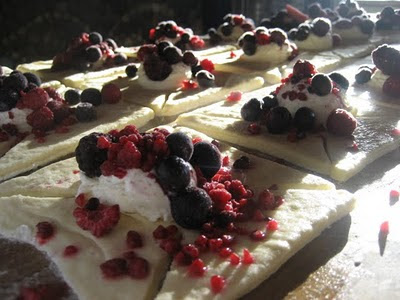 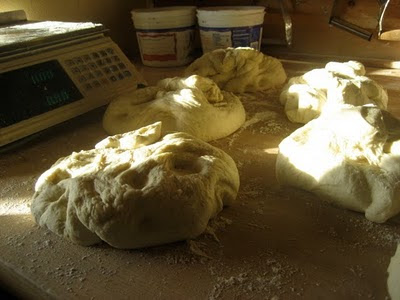 February brings fabulous light when the sun does shine and because it's so low in the sky this far north, it does so quite brightly on my baking table. As the fire crackles to life in the oven behind me and mouthwatering smells fill the air from Mels soup pots all lined up like soldiers on the stove, the front of the house hums away... the tables full of people chattering and laughing. It's a good mix of familiar faces and out of towners (you can so tell) everyone enjoying this one little moment where the sun is shining in and the food and coversation satisfying. Three legged mule, their old timey bluegrass, playing away on the ipod keeps the tempo of the room perfectly. I love moments like this, live for them, actually. Working as hard as we do, it's difficult to remember to stop and take a moment to appreciate the fact that we get to spend our days in such a lively and creative environment. When I look around the room and reflect back on the nearly 17 years of bakery life lived, I feel very happy to be right here right now. 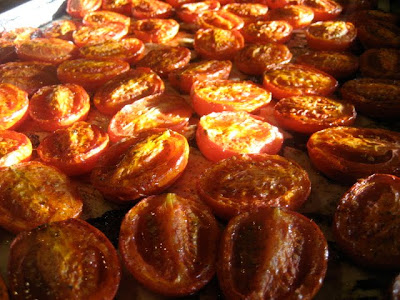 Some days you just want to eat everything...

Talk about suggestive selling...Irene's cupcakes literally flew out of the case! 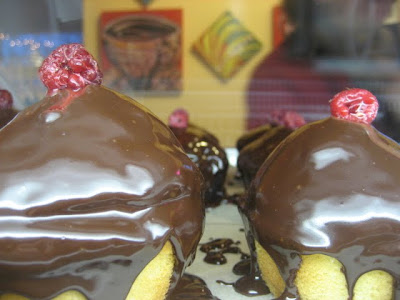 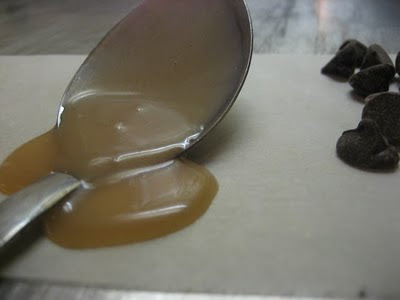 personally, I like my carmel on a spoon...which is an very good dessert, 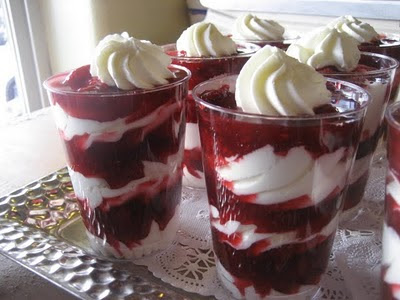 but then there's always a raspberry and cream parfait...ooooh, wait, what are those? 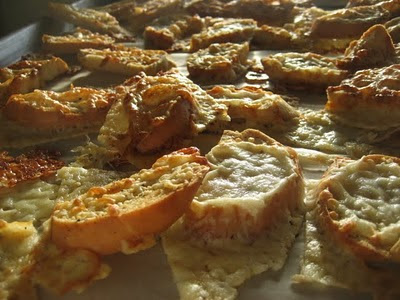 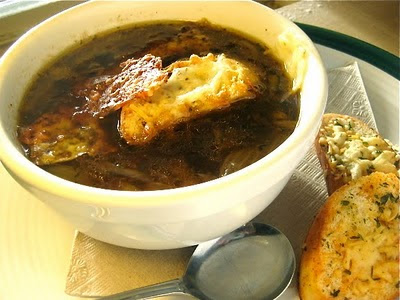