Springtime in Alaska and it's forty below! 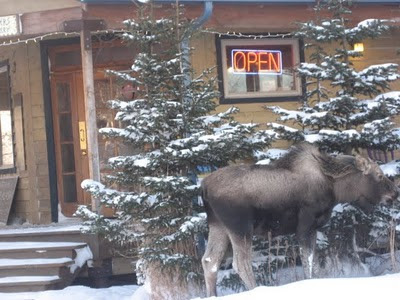 Johnny Horton said it best I guess, or at least that's how it's felt here lately. Like winter will never loosen her icy grip. It's one of the things that make working in a nice warm congenial place like the bakery so appealing. The sun streams in, we don't know how cold it is outside (until we have to go get wood for the fire, right Mel? Ryan, your tough, you can handle it!) The Bakes has been bustling away with visitors old and new (so great to see YOU, Caitlin!) and it's all we can do to keep up most days. We are ready to bring on more staff and with the Kachemak Bay Shorebird Festival coming up, it means summer is just around the corner. So. Not. Ready!

A quick update on Meatless Mondays...they are a huge success, each busier than the last. I recieved a nice comment from the folks over there and they are glad to have us on board...We will continue to inspire throughout the summer, I'm looking forward to much feedback, so far it's been all good!
Posted by Carri at 8:25 PM 1 comment:

The Mediterranean Focaccia was a hit: 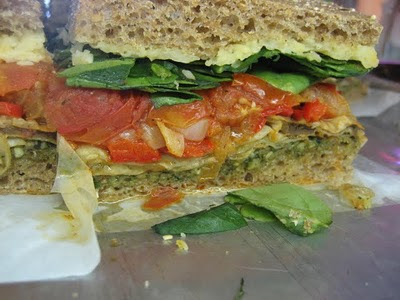 We opened the morning meatless and with little fanfare...monday mornings in early spring are usually a little quiet as everyone jumps back into the week, so it is the perfect time to introduce something new. We put a sign up on the deli case and announced it on the menu board, and that was about it. The case was stocked with an attractive array of meat-free treats and looked very inviting, it would have been difficult for anyone to not find something that appealed to them. I admit i was a little concerned about how people would react, given that some of our regular clientele can be very idiosyncratic and resistant to change. They come in day after day, ordering basically the same thing each time they visit, for some these habits have been in place for many years. These relationships are very important to us, so we do not enter into big changes lightly, if we didn't really believe with all our hearts we are doing something good for everyone, we surely wouldn't do it. So it was with that spirit we presented the facts and to my glee, we received very few negative responses... my favorite came from an old friend who comes in often with his family; "Carri, first you close in Sundays, and now no meat on mondays...what are you trying to do to me?" It was a good natured ribbing and I'm guessing he'll be back next week.
Making the shift to no meat was fairly painless, we don't have an extremely meat-centric menu but there are a few customer favorites that that we make everyday, replacing those was our biggest challenge. Biscuits and gravy are a breakfast staple so Mel made a savory mushroom herb gravy instead. It was rich with sauteed mushrooms and looked meaty and delicious. The ever popular ham and cheddar savories were replaced by a variety of vegggie and cheese danishes, some with spinach and mozzarella, some with tomatoes and brie. The hot seller of the day was the mediterranean focaccia, which stood in for our standard made with roasted vegetables and smoked turkey. We made it by lightly roasting thin slices of eggplant, red peppers and tomatoes and layering them with pesto, fresh spinach and melted mozzarella cheese. Up next week: Egg Salad baguette sandwiches made with local eggs (thanks Peg and Samantha!) and roasted red and sweet potatoes with melted cheddar cheese with homemade salsa on the side. We'll see you here!
Posted by Carri at 12:53 PM 4 comments: