No Dinners Until May!

We are taking a quick break from dinners while Carri goes on vacation with Maya to the East Coast.  We are all living vicariously through her, as her trip will doubtless inspire some great food journeys for us all when she returns.  When we begin dinners again on May 6th, we also hope to have our beer and wine license completed and be ready to serve you!  We will keep you posted.
Thank you, everyone who has already joined us for dinner, and if you haven't yet, we hope to see you here soon!
Posted by sharon at 1:24 PM No comments:

Drinking at my station: Pernod 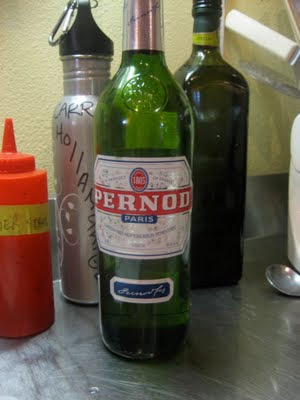 Every cook has their consumate culinary experience. The time they can remember not only tasting their food, but absorbing it, being completely raptured in a way that you will never forget that one moment. For me it happened 26 years ago this spring, I came to Homer that year. A wayfaring soul, not sure where I belonged, I had bought a ride up the Alcan with a gold miner heading to his stake north of fairbanks. I was living in Driggs, Idaho at the time, trying to be a ski bum. One of my coworkers heard me lament that I had no direction to head the following summer. He looked at me and said; "You should go to Homer, Alaska...You can camp on the spit, get a job at Land's End. It's perfect for you, you will love it!" I secured my passage and off I went. We ended up caravanning with a group of climber friends headed to summit Mt. Lucania in the Kluane Range of the Canadian Rockies. We celebrated my 22nd birthday with marguaritas at a mexican restaurant in Banf, Alberta, where the mountains soar to the sky right from the roadside. Completely enraptured by the changing scenery, I slept outside as often as I could, only jumping in the back of the truck under cover when the weather turned cold as we approached Whitehorse, Canada. There we left our climbers, my ride got me to Fairbanks and I caught a flight south. I landed at Homer's tiny airport and found a cab to take me to the spit. On the way out I asked the driver where to camp and he dropped me off right across the road from the Salty Dawg Saloon, pointed out the newly built public bathrooms and wished me luck. I'm quite sure he took one look at my gear and thought, oh yeah, she'll last a week. It was early May in Homer and for those who know, it's a little early to be camping on the beach in Alaska. My first morning I awoke to fresh snow on the rocks surrounding my tent and thinking to myself, what the hell have I done? I had $50 to my name and here I was, in the middle of the ocean... Literally speaking, as the spit is a 5 mile long stretch of land, just wide enough for a road in most places, that jets out from the town of Homer. My tent was parked almost at the end. One thing arriving so early afforded me was street cred amongst my fellow spit-rats (as we were so affectionately called). Many of them returned from previous seasons, but none as early as me. They were mostly cannery workers or charter boat deckhands. I was still trying to get that job at Land's End, but being here so early, they didn't need me (yet) I scavenged work as I could, cocktailing at the Dawg and where ever else I could get in. The evenings were spent around the campfire, sharing whatever we each had scavenged for food along the way that day. One night, one of the charter deckhands showed up with fresh oysters along with his nightly haul of halibut cheeks. I was a little reluctant at first, but being so eager to show these people that I belonged made me slurp that first one down. I don't know if I was just super hungry, or if it was the fact that I was on this amazing beach with the waves curling around my toes and snow capped mountains glowing in the evening sunset, but that was the best thing I had ever eaten up to that moment in my life. It was as though the waves at my feet were crashing in my mouth. I knew right then it was going to be very hard to leave this place. Thankfully, the job I was hoping for finally came through, and it was there I was introduced to the dish that would forever change how I looked at restaurant food. Oysters Rockefeller was one of the most popular appetizers we served in those days, and the kitchen under the hardworking and talented Sean Maryott turned out a very upscale version, topped off with a real hollandaise that just made the whole dish sing. I ate a lot of Rockies that summer. Eventually I learned to 'rock' them out myself as a prep cook in Sean's kitchen. In my mind they have become that dish that represents all that I love about good food. Quality ingredients, deceptively simple preparation and luxurious results. An important thing I figured out was when you don't have a lot of ingredients in a dish, those you do have need to be the best they can be. One of the keys to authentic oysters rockefeller is the addition of Pernod. This anise based liquor has been around since the days they outlawed absynthe, which is about the time this dish was created in New Orleans by the chef at Antoine's. Apparently even the random Homerite knows that. When I was in line at my favorite local liquor store, the guy behind me looked at my bottle and said, "Hey, Pernod...you making Rockies?" I proudly answered... Why yes, Sir, yes I am!
Posted by Carri at 8:36 PM 2 comments: