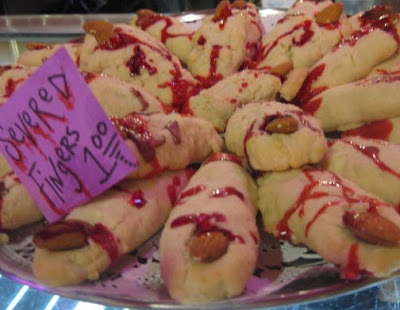 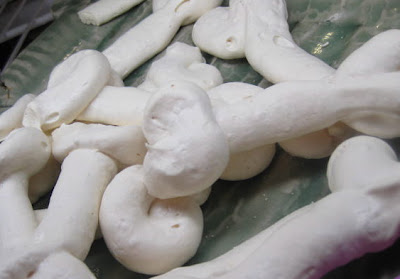 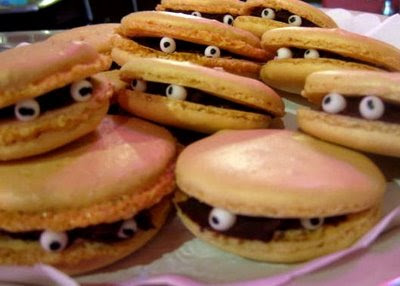 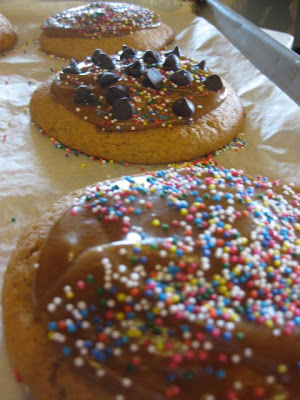 You can tell when things are slowing down around here... people, me included, who can't see straight because they are so busy in summer, actually get a chance to catch-up...the errant weather makes for quiet afternoons here at the bakery. The 'winter regulars' keep us entertained, and on our toes! It was one such stormy afternoon a week or so ago that I was working the counter (another sure sign of winter) when one of our w.r.'s called me over to lodge a complaint. It seems the pumpkin cookie he had gotten the day before (and had looked forward to with much anticipation, apparently!) had chocolate chips in it! Now, it's true, we have been making pumpkin cookies for a while now...only in fall, a seasonal specialty, if you will, and no, we have never to my recollection put chocolate chips in them. Frankly, I was as stunned as he was, but I assumed it was some logistical error...in no way malicious, so I assured our customer that I would get to the bottom of it and that he could be certain the next one he got would be choco chip-free. I must be clear in that he wasn't allergic to chocolate, he just didn't want it in his pumpkin cookie...ok, so, as this is happening at the bakery, Sharon, is somewhere across town shopping or something when another 'w.r.' approaches and wants to tell her that they had just had a pumpkin cookie at the bakery and it had chocolate chips in it...it was the best cookie she ever had! We laughed when we shared that story only to cry when the phone rang and it was someone who had just read our recipe in the newspaper (oh yeah, you know what for...pumpkin cookies!) and it said to cream the sugar with the butter, but the sugar was left out of the ingredients list! The paper only comes out once a week...these calls will be coming for who knows how long! Damn you pumpkin cookies...you'll be my undoing!
You can get the correct Pumkin Cookie recipe Here!
Posted by Carri at 8:25 PM No comments:

A blast from the past... 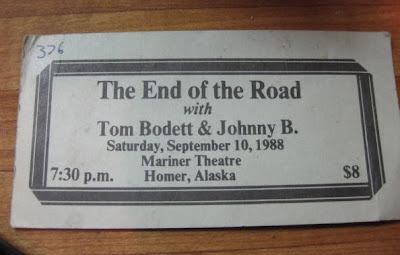 As with most people I know here in Homer, my friendship with Tom Bodett began through food, that is, him ordering and me serving...in that way, it started out as an entirely professional relationship. It was right around the time that his second book was published that I first came to Homer and it was during my first winter here that he began his radio show, I felt priviledged to help out with catering backstage.
Through his generous nature I was introduced to many people who became good friends at a time when I was very new to town. Tom's time living here in Homer was spent, in part, dodging the growing number of tourists he was attracting to town and much of the rest doing his best to promote the local arts scene on a meaningful level. In 1991, he helped me by sponsoring a 'Winter Writers Series' at the little bistro I was running, which attracted such varied national talent as Tess Gallagher and Bill McKibben as well as local luminaries Tom Kizzia and Nancy Lord (who was just named Alaska's writer laureat). It was also through Tom that I was welcomed into a group of local writers who helped mentor me into living a writers life, (whether or not that's where my paycheck was coming from). Unfortunately for us, Tom and his family have been gone from Homer for a while now...too many tour buses stopping in front of his house, I'm cetain. So it was funny to me when one day, about a month ago, while sweeping the bakery floor after closing time, I picked up what looked like a business card from the dining room floor...it was this ticket, to the first taping of 'The End of the Road ' radio show in 1988...nearly 20 years ago to the day! I sent off an e-mail to Tom telling him about my find, citing it kinda strange. He responded with his familiar blend of humor and pragmatism, "I think it's more likely someone just needs a new jacket!"...that radio show didn't last too long but I'm glad that, at least in some small way, our friendship has. Take care, Tom...we'll see you on the radio!
Posted by Carri at 6:31 PM No comments:

It's 30 degrees out and the snow that fell yesterday is still on the ground (it was the 5th snow we've had since the 1st when this whole winter madness started!) the skiers are hopeful and everyone else is running sround trying to get their outside chores done! Thank goodness the bakery is always warm, always bright...
Posted by Carri at 7:15 AM No comments: