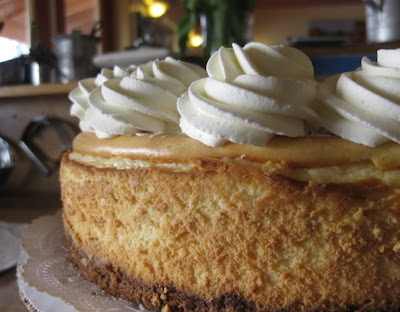 I've been making cheesecake since I was 17. It's too long of a story to tell here, but I learned the recipe from a gal I went to cosmetology school with (Thanks Frances!). Yes, Cosmetology school...who even knows what that is, right? Anyway, it's interesting that, in the end, I would actually become a baker and one of my specialties would be cheesecake. Up until 3 years ago I had been using basically the same recipe for 20 years, one that I thought was New York Cheesecake. I'm a Taurus and very stubborn, so, a few summers ago when working out a dessert for a local restaurant, they kept asking me to change my recipe to reflect a more 'NY' style cheesecake, I was, like, "What do you mean... this IS a New York Cheesecake! It took alot of dialog before I finally looked it up and realized that I was so wrong. (did I tell you I was stubborn?) The recipe I was using had an equal ratio of cream cheese, eggs and sour cream, where the classic NY style recipes I was finding were mostly cream cheese, making for a firmer, drier texture. I adjusted my old formula and at long last gave my customers what they wanted...they've been a huge hit ever since! The full recipe can be found here p.s. Happy Birthday Bonnie Powell! I hope you liked your cheesecake!
Posted by Carri at 9:38 PM 1 comment:

A day off from the Bakery and there are eagles everywhere! 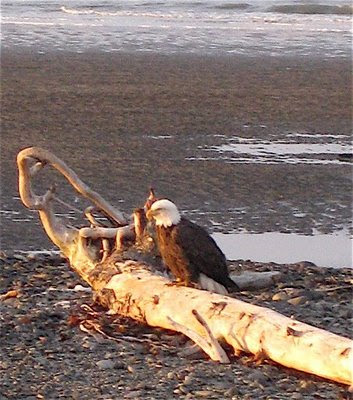 Sometimes, after I take the kids to school on my day off, I will drive down to the spit to walk the beach and watch the sunrise over the mountains and check out the eagles! 24 years ago I came to Homer on a friends recommendation to camp on the spit and have a little summer adventure. The first day I was completely entranced by one eagle resting on a signpost. I couldn't believe he was so close or that no one else was paying much attention. The next morning when I climbed out of my tent (which was pitched right where this bird is now!) to find I was surrounded by over a hundred bald eagles, I realized why no one looked twice at just one!
Jeanne Keene, also known as the 'Eagle Lady' passed away a few weeks ago...she had been feeding the eagles from her trailer at the end of the Homer spit since the '70's. The huge number of bald eagles that hang out on the beach here in the spring is due in a large part to Jeanne and her cannery scraps. It has made for alot of controversy between the 'bird' people who think this is not ok and the many professional wildlife photographers that come this time of year to capture images of these beautiful birds up close with snow covered peaks in the background. Now that Jeanne is gone they are allowing the feeding to continue until the end of March of this year and that's it. The birds (hard to call them birds...they are the size of a small child!) relocate to salmon streams across the bay come summer, but I wonder what will happen to them next winter? 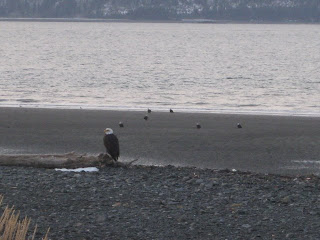 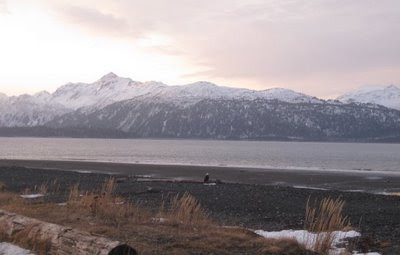 its Monday...have a piece of quiche 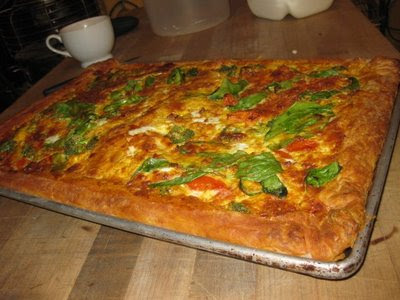 It was just like any other morning in February...around 7:30 am, kinda slow, only a couple of customers, one of whom is Charles' teacher. As we were chatting about all things Charles (one of my favorite subjects!), a guy walks in...he's real tan and kinda scruffy in a good way. He has this huge thing with him wrapped in a blue tarp and tied together really well, which when he props it up at a table, looks like a mummy. We were all, "Hey, what you got in there?" and He says, "It's my grandpa."
I just love Mondays at the Bakery!
Posted by Carri at 6:36 AM 1 comment:

A case of the 'Februarys' 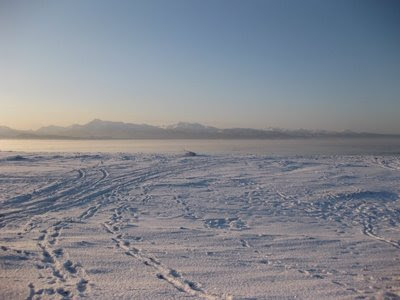 Bishop's Beach, by the bakery, is slippery with salty ice making for dicey beachwalks...walking on the slimey half frozen gravel mimics the unsteady feeling this month always gives me. We still have a couple of months of winter ahead and while the days are longer, it's not by that much yet, so if the sun doesn't come out it feels as though it never gets light at all...just this dreary gray. It's not all doom and gloom as we congratulate our friends Corina and Jud on getting married (!) and so many new babies it's hard to keep track! I know as we head into march things will brighten up...it's this time of year I'm reminded of one of my favorite quotes: "In the depths of winter I found within me lies an invincable summer." -Albert Camus
p.s. one other thing that always perks me up are the amazing things this gal comes up with...
Posted by Carri at 7:25 AM No comments: 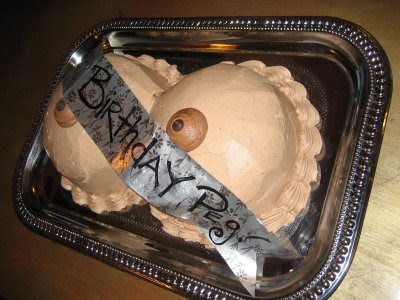 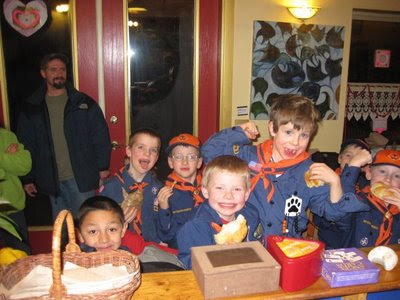 The Cub Scouts came to visit this week! We arranged the tour for closing time...which was a little different in the sense that we weren't really baking anything at that point, at 6 pm in February we are usually walking out the door, floors mopped and all. Luckily, we had a big fire in the wood stove and little boys really love fire! So do their dads, so we got to answer lots of questions and I realized how few people in town actually are aware of exactly what it is we are doing here, baking in this huge brick oven. With the open kitchen format I always just assume that anyone who comes in can see what's going on, but the oven isn't clearly visible from the front door and if you don't walk past the pastry case, I guess you wouldn't notice. It was fun seeing the little guys get so excited about just being back in the kitchen and seeing how big everything is compared to their own kitchens at home. I asked them what they most wanted to learn how to make...most of them said 'Cake'! After thoroughly discussing the oven, we marched them back to show off the 'tower of flour' (can you believe how much cake that would make?) and on to the hand-washing sink, which is, we liked to remind them, where we spend ALOT of our time! They moved around the corner to Maya and she gave them a quick lesson on making a latte. This was my favorite moment and as I looked on along with the attending parents as my daughter (the one I gave birth to one month after we opened the bakery almost 16 years ago!) so poised and professional showing her stuff, I had to fight back tears. We sent the boys and their parents off with cookies and white trash rolls and lots of smiles! Thanks for coming guys!
Posted by Carri at 7:17 AM 1 comment:

You can see right through MY heart! 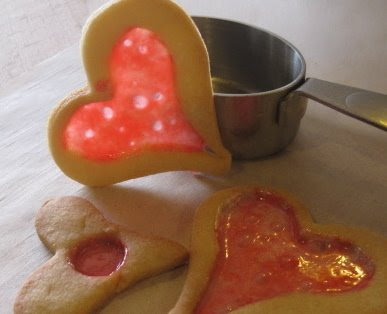 Maple Butter Cookies are my go to cut out cookie dough. I know, using real maple syrup (especially at this time of year!) is not exactly the most cost effective thing in the world, but a tasty sugar cookie made with love could sub in nicely for a dozen roses grown in Equador, (by women with no say over the pesticides they are exposed to...oh, don't get me started.) Instead make some cutouts by using two different sized cutters and crumble up some hard candy in the center...seriously, this is some crushed candy cane left over from the holidays, we're recycling here! Bake as usual and you will be rewarded with these magical gems, sure to delight even the most hard to please of hearts...(um, yeah, so, i forgot the maple butter recipe at work...so, like, i'll have it up on the recipe blog tomorrow...pinky swear!)
Posted by Carri at 11:10 PM No comments: