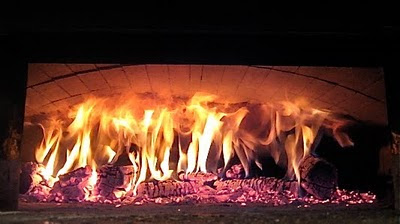 The fire has been pretty sweet lately...after spending most of the winter skimping by on wet alder and a bit of birch we finally got a good wood groove goin'! My husband found a batch of white birch from the valley which showed up about the same time as the spruce being sold by my kids school as a fundraiser, along with some nice alder poles from our woodsmith, Sandy Stuart, we are back on track...and then some! We are now firing only once a day, starting around 3 pm and hitting the 750 degree mark around 6 pm when we close it up. by the next morning, it's hot enough for bagels and breads and whatever Abbey or Sharon throw it's way...by afternoon it's still hot enough for cookies, cakes or whatever else is on the baking list...that is, until it's time to start the process all over again! 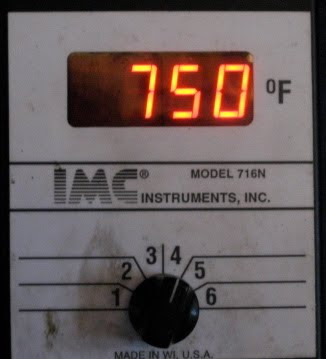 This week Homer Council on the Arts is hosting their statewide meeting. We were honored to be asked to feed them on their first night. We began with and an antipasti collection including: oven roasted crimini mushrooms marinated in rice vinegar, soy sauce and honey, oven roasted artichoke hearts with lemon and olive oil, smoked oysters on a bed of pickled red cabbage and a savory white bean puree. 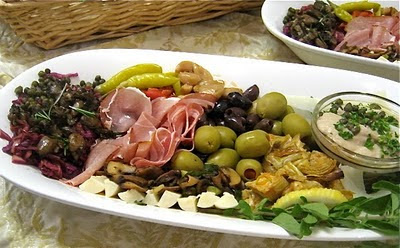 Also a simple Caprese Bruschetta, it doesn't get any better this far north than fresh basil, tomato and mozzarella...all on toasted ciabatta. 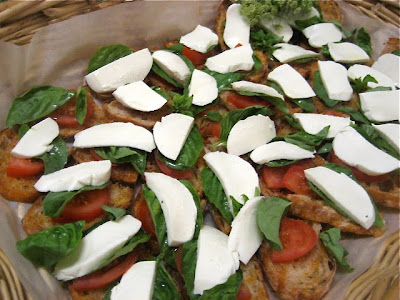 a fresh green salad dressed with a slightly sweet and tangy balsamic vinaigrette. 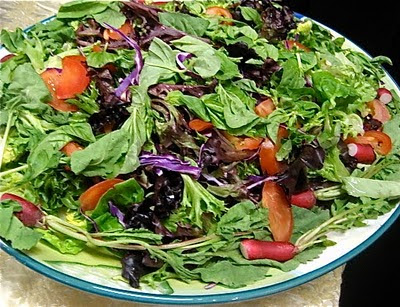 As a main course we served a very rich Eggplant Rolantini...the thinly sliced egglplant is dredged in flour and a seasoned egg mixture and then roasted on sheetpans. They are then rolled up with mushrooms, leeks, spinach and mozzarella and laced with housemade marinara. 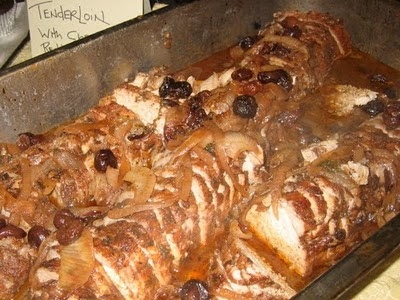 And for those meat lovers, a pork tenderloin, braised in red wine and dried cherries...oh yeah!
That was so fun, how 'bout breakfast? See you at 8 am!
Posted by Carri at 9:21 PM 1 comment:

Meatless Mondays...a movement for the future with roots in the past 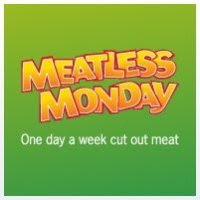 Yoko Ono does it (and tweets about it), Dovetail Restaurant in NYC does it, even Oxford University in England does it. The 2009 documentary 'Food inc.' listed it as on of the 10 things you can do to change our food system. Meatless Mondays isn't a new idea, originating during WWI as a conservation measure (they also practiced 'wheatless wednesday') and reintroduced during WWII by Herbert Hoover. Actually, according to Frederick Kaufman in his entertaining and informative book "A Short History of the American Stomach' our nation has been fasting regularly since the very beginning for both religious and conservation purposes. As late as the mid 1800's it was a practice sanctioned by the government in the form of communal fasting days. Given all that, just going without meat one day a week seems hardly a sacrifice! 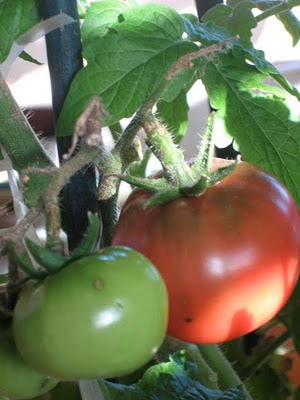 The Meatless Monday Movement began again in 2003 as a nonprofit initiative of 'The Monday Campaigns, inc.' in association with the Johns Hopkins School of Public Health's Center for a Livable Future. It was then endorsed by 20 schools of public health and spread to schools and organizations across the country.
The idea is to use the first day of the week to set healthy patterns and intentions for the week ahead. If you miss one Monday, there's always next week. See healthymonday.org for more on this theory.
Why Meatless? The John's Hopkins initiative was orginally introduced to reduce consumption of saturated fats in the american diet, but the benefits also have a global effect. The Observer wrote in 2008 about the United Nations sanctioning the consumtion of less meat citing these statistics: The meat industry generates nearly 1/5 of the man made greenhouse gas emissions that lead to climate change. Current large scale meat farming methods contribute half of the pollutants in our rivers and streams. Production of 1# of meat takes 2500 gallons of water (compared to 220 gallons for 1# of soybeans)
This movement is not without it's enemies, the Atlantic Monthly wrote in 2009 about the reaction of the meat industry to public schools declaring meatfree mondays. With their stronghold on goverment subsidies and powerful lobbists, they prove formiddable opponents to the winds of change. 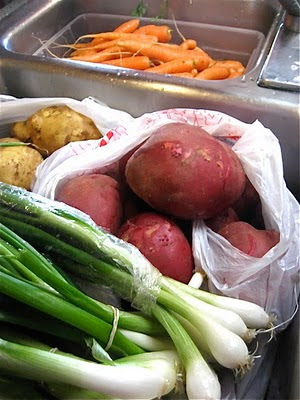 So, for the health of our planet and the health of our people, we want to show our support and join in the movement.
Starting April 5th the bakery will be going meatless on mondays. It's biscuits and mushroom gravy and spinach & cheese danishes for everyone...trust us, this won't hurt a bit.
For more information go to meatlessmondays.com
As an added measure, I know lots of people have adopted a 'fish on friday' tradition. So if you had a vegetarian meal on monday and fish on friday, that would be two days a week of no meat consumtion, think of the difference it would make if we all made the commitment. Not to mention supporting those fisheries working hard to put quality 'sustainable' protein on our collective tables.
Posted by Carri at 5:12 PM 6 comments:

Spring Break...scenes from a busy bakery! 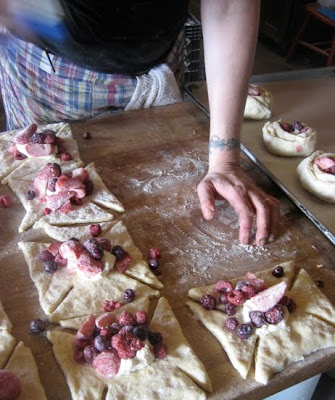 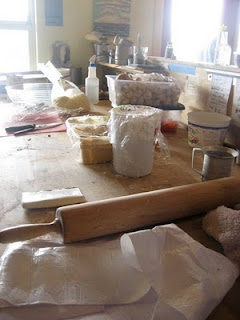 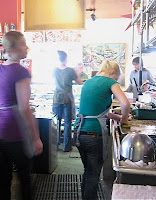 I returned from a week of fun with my family to find the bakery busy as can be for mid March in the middle of a recession. The fire was nice and hot, the oven and Sharon pumping out some beautiful baked goods: bread, sticky buns, cinnamon rolls, savory danishes...Mel and I could barely keep up (I think I frosted 5 cakes today, not to mention cupcakes by the dozen!) What with the Homer Winter King Salmon Tourny in full swing today and lovely weather getting everyone else out, it sort of felt like summer for a minute there...
Posted by Carri at 10:10 PM 3 comments:

This is killing me!

I am getting rid of the pictures from this post, cause...well, they grossed everyone out. But if you think you can take it, click on the link...go ahead, I dare ya!
Bread Head Bakery
I love it when something just is so amazing that you have that: "Why didn't I think of that?" moment. This is the best thing I've seen since, well, 'sliced bread'! So, Irene, do you think they take externs? I found this via my lil bro' William. thanks, buddy...you made my day!
Posted by Carri at 9:43 PM 2 comments:

View from the baking table...snowed in! 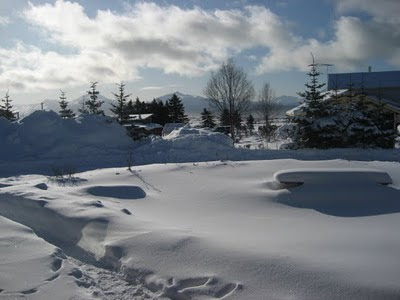 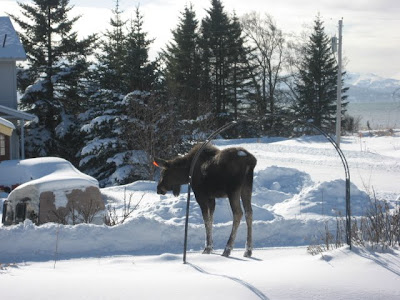 The blizzard of 2010 wreaked havoc on Homer last week, causing schools to close not once, but twice in a weeks time (it's been 8 years or so since they closed just once for snow!) and even the bakery had to close last Tuesday because everyone was drifted in and the wind was still blowing 40 mph! By Thursday, though the sun was peaking through and all of Homer rejoiced in a winter renewed. Even our moose friends. The deep snows drive them down to the lowlands, so they are everywhere around the bakery right now! 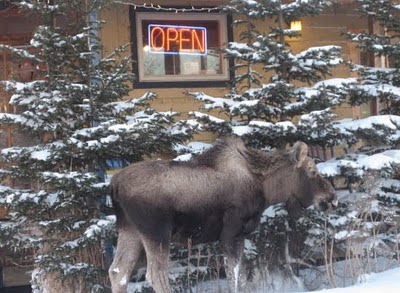 Email ThisBlogThis!Share to TwitterShare to FacebookShare to Pinterest
Labels: view from the baking table

The Homer music scene has always been an eclectic, varied offering. Here at the Bakes we've been big supporters over the years hosting the likes of Michelle Shocked and Dar Williams and feeding many more like John Prine and, my favorite, Ladysmith Black Mambazo. (Their recording "Graceland" with Paul Simon is one great kitchen CD) The hug I got from Bruce Cockburn on my back porch as he was waiting for his cab is also a huge highlight. (I've been a fan of his since my early days ski bumming in the Tetons...all I can say is "Goosebumps!") Now that I really think about it, though, my biggest musical moment came when Ritchie Havens moved into our B&B rooms for 3 days. (once, a bunch of years ago, I went through a huge ordeal to get one of his CD's for my husband's birthday) Normally, performers who stay with us are in and out overnight. We're happy if we get to greet them at the door when they check in and hopefully serve them a latte and sticky bun in the morning before they jet off to the next show. Well, Ritchie was able to dig in and enjoy the scene. He spent his mornings sitting at the counter, just a knee wall away from where I was cooking. On his 2nd morning in town, I had a quiet chuckle as he was being chatted up by my neighbor and local rogue, Billy Sullivan. But then, as I caught on to the conversation, I realized that Ritchie was relating his Woodstock experience to Billy. How he had to keep playing because the band that was scheduled to follow him was late (I believe it was the Who) He improvised this song that became an anti-war cry for an entire era. There I was...chopping mushrooms for soup, afraid of walking away from my station & missing anything he had to say. I could've burned a million pans of whatever, I was gonna stand there until he stopped talking. The next morning he sat in his spot and the line went out the door with people wanting a signed anything from him- talk about feeling the love.
Tomorrow, Thursday, March 4th (7 pm Down East Saloon), another old friend is coming to visit: 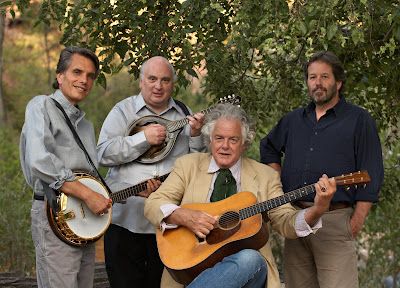 The Peter Rowan Trio has graced the Homer stage before. My favorite memory if his first visit: We were in the space the bakery occupied in the Old Inlet Trading Post and he was staying in the rooms above. 'Sister' Kate was fairly new to the bakery and Homer but was a huge fan of Peter Rowan. She hung around all day hoping to meet him. It wasn't until after she left he made his way down the slanted stairs next to the bakery. We were able to exchange a warm greeting and as he was leaving Sharon stuck a flower in the lapel of his mustard yellow jacket, "This is for Kate, she's a really big fan"