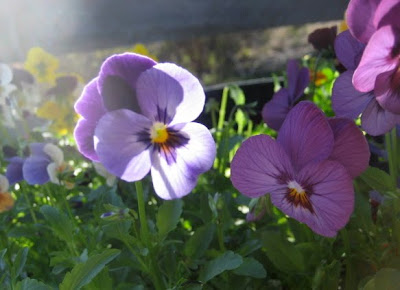 Its truly spring now...no denying it. Memeorial Day is just around the corner and so is the planting deadline for those of us here in the northern climes. This has always been the weekend that you could be sure the danger of frost has passed. Every once in while we have an amazing spring and are lulled into that false sense of security that inevitably has us running out with the remay in the middle of the night due to a late spring chill. The local greenhouses are brimming over with bedding plants and even though it's a bit early to plant in the ground, its time to buy, because the reality of a small town is there is only so much to go around, if you want the best selection, this means shopping early. Which also means nursing along a bunch of plants until they are hardened off and ready to go in the ground. This isn't so hard at the bakery with it's sea-level elevation, trees are starting to leaf out in the yard and things are well on their way. It's a different story up at Sharon's house, however...1500 ft elevation, I believe there is still some snow on the ground even now! What's with all this planting nonsense you ask? Well, while we know we will never be a Blue Hill at Stone Barns, we do like to grow as many things as we can to use in the kitchen. Herbs planted in the window boxes by the baking tables serve as savory additions to soups and salads. The flowers in the yard are used like crazy to decorate cupcakes, catering trays and even whole wedding cakes. We also have a couple of vigorous rhubarb plants that provide homegrown goodness for rustic tarts all summer long. The local flora is also just about ready to give over it's goodness. Nettles are almost ready to harvest for pesto and the fiddleheads are just popping through, in a week they will be ao ready. On this note, I'd like to tell you about our new favorite food blogger, Hank Shaw takes the role of hunter gatherer to extreme and chronicles it all at his blog: Hunter Angler Gardener Cook . I have a feeling he would be right at home up here! 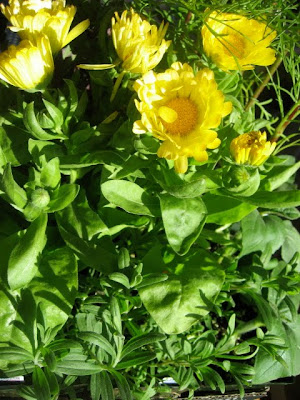 Lavender and Calendula...both so healing, and delicious!
Posted by Carri at 8:29 PM 2 comments: 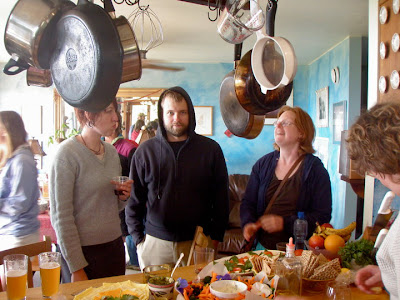 We spent alot of time this past winter plotting the upcoming summer. Especially at the end when the blizzards were raging and business unpredictable. The roster of workers started to come together nicely. We have a great group of people who all get along, alot of challenging catering events and the whole crazyness of summer to look forward to. And while every summer has it's curveballs, we were still basking in the hopefulness of spring.
But now, the title of my last post seems oddly out of place, a little more than a week later and life is not springing eternal as we had hoped, in fact just the opposite. Our baker and Bakery BFF, Irene, arrived last thursday from Portland and visited us friday to work out the summer schedule and give hugs all around. A few hours later she called breathless and shaky to say she was flying back to Portland that night to be with her husband, Jake. (who stayed behind to finish school) He was in an accident and they were performing emergency brain surgery. By Saturday afternoon, His family was told he would not recover and just like that, he was gone. We all are stunned and, for Irene, completely confused and devastated. Jake had been in our lives just a few short years, but he won us all over immediately with his love for Irene and a sincere interest in all that she cared about. My kids took to him right away, which says alot, just ask anyone around here who's tried to strike up a casual conversation with Charles, hard to get that boy to talk. But Jake could. He was a teacher and good at it, he was a musician and mighty good at that, too. We all danced in the wind and rain at their wedding last summer and thought to ourselves: These two are perfect for each other!
Well, the universe apparently had other plans.
I know this post doesn't seem to have that much to do with baking or food, but if you look at it closely it does. All the preparation and watchfulness in the world does not insulate us from the occasional reminder that we have no real control over the outcome, all we can do, is our best along the way.
Posted by Carri at 10:11 PM 1 comment: 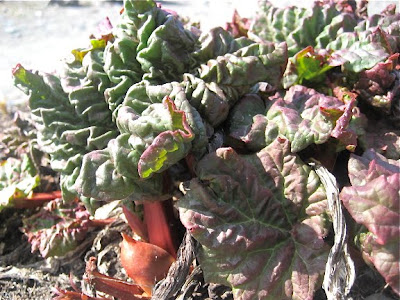 The snow is gone...at the lower elevations, anyway and nothing says spring like the sprouts of a Rhubarb in our own yard, these will be pie soon...just you watch. We are busy beyond our capacity...hence my lack of recent posts. I think we are starting to see the summer, and as our staff creates itself, we can begin to compose the roster and get our schedules figured out. Like the rhubarb emerging, we have people making their way to us, it's an organic process, with alot of faith in the universe thrown in! It's looking like a fun crew and a busy summer with the famers market, weddings scheduled almost every weekend (not to mention Sharon and Dale's on the 15th of August, it's going to be the party of the summer, I assure you!) and the never ending cookbook project to keep us occupied. If anyone wants to test recipes for us, check in over at the recipe blog and we'll send some stuff your way! Spring is also big for birthdays around here with Sharon at the end of March, Kate at the beginning of April, then Mel in mid-month and me towards the end. One of the highlights of my day (besides all the fantastic people who came to celebrate at our bonfire!) was Hayley and her burning poi balls, which she used to put on an amazing show once the sun finally went down. 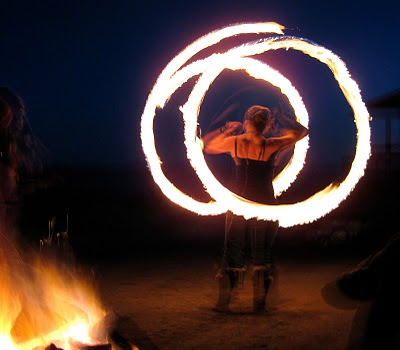 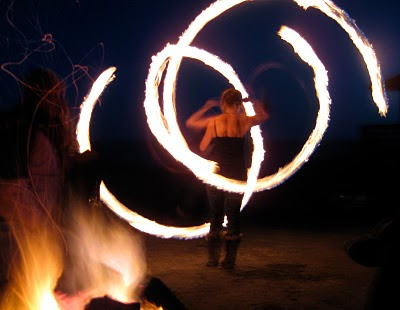