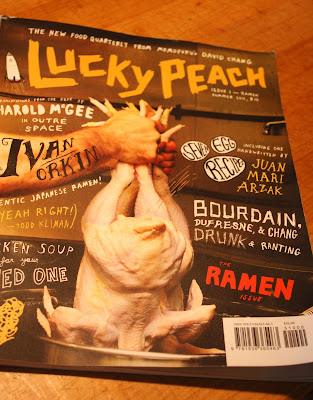 I love it when something comes along that is such a breath of fresh air it completely re-energizes you. I heard about David Chang's magazine Lucky Peach when it first came out earlier this year, but for some reason I resisted. All I can think of is I was wicked busy, or high on crack...because this is best thing I've seen in a long time....Chocked full of your favorite swear words, rich with the voice of Chang along with a smattering of Bourdain and a thoughtful explanation on noodles by Harold McGee, it even has recipes. I must warn you, though...the alkaline noodle formula has a fatal flaw...so be sure to go online and get the correction before trying them for the first time. And certainly don't try to make them the first time right before service...I was less than happy with mr chang when my first attempt came out like a risen pile of mini funnel cakes before they are fried. Good times! If only I hadn't already put them on the menu...(yeah I'm smart like that) A quick internet search found the correction posted by McSweeny's on their website and the second batch came out perfect, just in the nick of time. This is a magazine for people 'in the biz' if the civilians want to play along, that's fine, but be warned...it's not for the faint at heart.

A whale of a Fish Sauce Story... 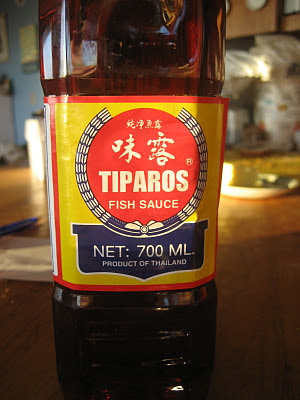 Every once in a while, you enter a vortex. A place where things seem to hover together in ways seemingly random, yet oddly contrived. There is this force in your life that will not go away, refuses to say the long goodbye. It can be a thing, a person...sometimes even a radio station. In one of our prep cook's case this past winter, it was fish sauce. Shay had been working for us since the spring before, we watched as he and his love got married (she worked at the bakery as well, so as you can imagine we were all quite involved) and tried to teach him what we could about cooking and life. Alas, part of that education was dished out by practical joker chef Ryan, who one day watched while Shay caught a whiff of fish sauce and wrinkled his nose in disgust. Seeing the chink in his armor, Ryan went in for the kill. When Shay got to work every day, Ryan would take a little fish sauce onto his fingers and pat Shay on the shoulder, "Hey, How you doin' man? Having a good day?" rubbing the sauce into his shirt. He would smell that smell all day and wonder where the hell it came from. We all got a good laugh and eventually Shay figured it out. Could it be why he took his girl and moved away? We'll never know for certain, but I couldn't help being reminded of that joke when fish sauce reentered my world recently in just about the oddest way possible. Nothing at all to do with asian cooking sadly, because it truly is one great condiment. No this time it was as the punch line to a joke played on me. My old friend Tom Bodett and his lively, lovely family came up to Homer for a visit this summer. The radio show Tom is involved in, Wait, Wait, Don't tell me, was in Alaska to record a show in Fairbanks, so they came down here to say hey to their Homer homies and romp around on the beach for a few days. We got a bunch of Tom's old gang together,  had a party and just generally yucked it up. It was a short couple of days, barely enough time to catch up. Lucky for us, it turns out my daughter is going to a little college very close to where the Bodett's live, giving us even more of a reason to keep in touch. In that light, it wasn't unusual to see an email from Tom in my inbox when I got home from work a few weeks back. What was a surprise was the subject line which read: "I hope your not mad!"
Then Tom goes on to say;
"I had an opportunity to use you and John in my bluff for this week's show. I needed someone I knew were good sports, and that would be you. Of course now 4 million people will they know something about your love life.  Sorry about that part!"

Intrigued, I read the bluff:


When Carri Thurman first met her husband of 20 years, commercial fisherman John Rohr, it was love at first smell.  "he'd just returned from a 10 day cod trip.  His fingernails were jammed with bait fish, his hair was crusted in slime and, I don't know, it made me so hot.  I grew up in an observant, almost orthodox, Norwegian family where there was a lot of love and a LOT of fish - lutefisk, pickled herring, smoked cod.  Seriously, the phrase "something smells fishy around here" is a Scandanavian pick-up line".  Carrie and John's happy long marriage was rekindled every time John returned from another fishing trip.  So it"s no surprise that John's recent retirement from fishing took some of the bloom off that old marital rose.   "we were starting to wonder what to do about it when we stumbled on the answer at a Thai Restaurant in Anchorage -- fish sauce.   I swear, John dipped his spring roll and I almost took him down right there at the table".   It turns out that Thai Fish Sauce has exactly the right pheromonal chemistry to simulate a mixture of cod slime, bait herring and bilge water.  "It's like catnip for a Norwegian or a Swede" says a beaming John who's Internet sales of fish sauce repackaged as Return to Port, Cologne for Men have topped ten thousand units.

Suffice it to say, I haven't laughed that hard in a long time, but what didn't really hit me until later was that, as Tom said, a million other people were going to hear this! Little did I know the vortex I was entering. Unknown to Tom, my NPR momentum had begun weeks before when the news picked up on a local story about the Homer Chamber of Commerce giving up their affiliation with the national organization due, in part to a conversation I had with the new director of the chamber. We had stopped being members a few years back because Sharon and I felt that the national chamber had gone too far with it's lobbying for big business and Homer's association with them made us uncomfortable. I had the opportunity to share my thoughts at an informal meeting with incoming director Monte Davis, having no idea they would have any effect at all, let alone the desired result. Well, the story was picked up by the Associated Press, they came and took my picture and interviewed me and the article ran in papers across the country...I was amazed at the interest...a lengthy exchange in the comments section of the Anchorage Daily News had me wondering if this was all such a good idea. A week went by in relative quiet and then just about the time I thought the whole silly thing had gone away, I received a call from NPR. Actually, the call came from our local KBBI news guy saying he'd been asked by NPR to do an interview for a news story to air on their program Morning Edition. He came down and talked to me, recording busy bakery sounds along the way. We were still kind of busy, so I put the interview in the back of my mind and when it didn't air that week, I assumed it had really truly died for good. I couldn't have been more wrong. The morning after getting the email from Tom, I awoke to texts and emails from friends and family on the east coast who had heard the NPR story. I quickly cued it up on the their website and sure enough, there we were, the bakery and I on national radio. I got to work just after it hit the air here and we all laughed at what a crazy small world it is. Then I shared the news of the Wait, Wait 'appearance'. The world just got even smaller! That show aired two days later and I can't help but wonder if that contestant they were trying to bluff hadn't been wondering in the back of his mind; "Now wait, wait... Carri Thurman, where have I heard that name before?" 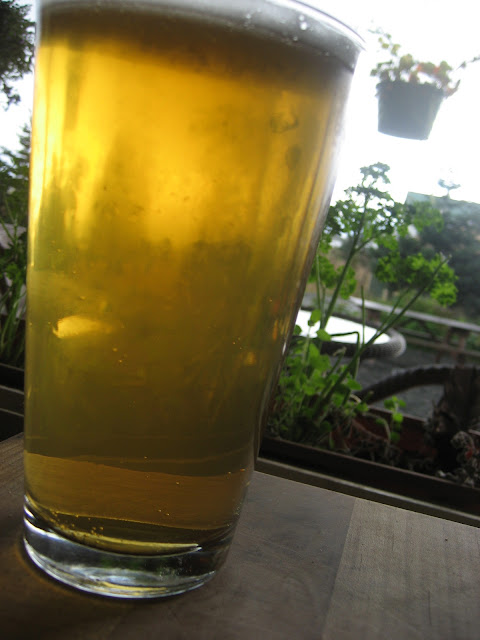 Finally, the keg cooler is in! Poor little appliance had to spend the summer in storage on the porch and then when we finally got it in place, the sucker didn't want to work. Snap. A call to our refer man (go Andy) and a leak discovered and repaired...we are finally in business!  Our local Homer Brewing Company already sells all the beer they can make (boy do we understand how that feels...we've turned down more wholesale accounts than you could shake a rolling pin at).  So we decided to get the next best thing. Glacier Brewhouse in Anchorage, besides being one of my personal favorite dining places in town, also has one of the best IPAs in the state. That, along with their Blonde Ale (pictured above) make up our humble, yet pretty darn fabulous tap beer selection (that we have tap beer at all is pretty fabulous...don't you think?) A big thanks to Darren and The Odom Corp for giving us the cooler to use and setting us up so nicely...they ROCK. 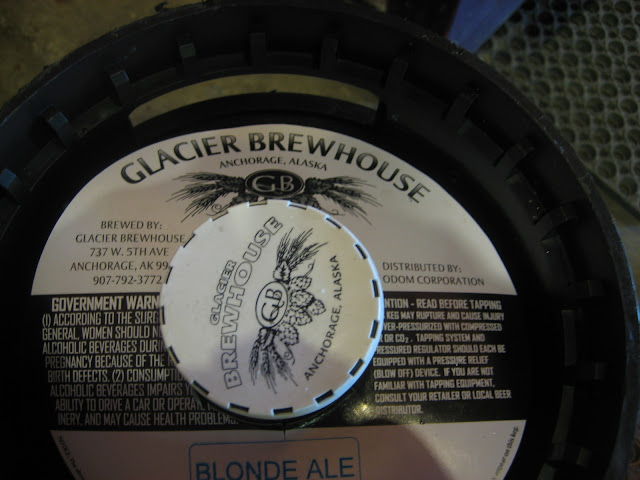 A little reminder, we are closed for dinners this week as the chef has run off for a quick vacation.
(those chefs can be soo demanding... Oh wait, that's me!)
We'll be back next week with our fall menu in full swing and some awesome specials inspired by my travels. Expect something a little tropical...mmm.
. 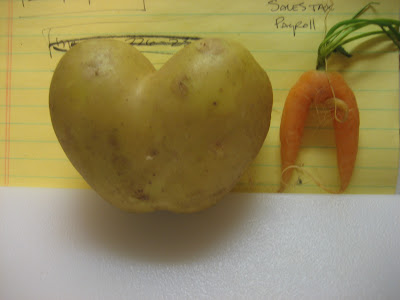 And on another, completely unrelated note:
Some people put pictures of their kids or inspiring quotes up at their work station.
Me, I like to gaze up at vegetables that look human.