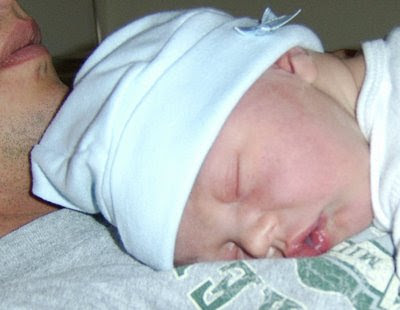 Daddy Darren and I became friends when he would rollerblade into the bistro I was running. I think he was 14 at the time, I'd steam him up a mocha and he'd dump the whole bowl of sugar cubes into it and stir and sip as we gossiped away about people around town. Years later he held my babies while visiting the bakery, by that time we could share a beer or two... Then he went off and got a life of his own...marrying the lovely Erica in our newly built bakery yard in 2003, and having little Cecelia a few years later. Now my buddy Darren has a boy of his own. Great job Erica! Break out the Sugar Cubes!
Posted by Carri at 9:14 AM

What a lovely post! Nice to the the newest Fitzpatrick on the web.
:)