embracing the cupcake and crazy people 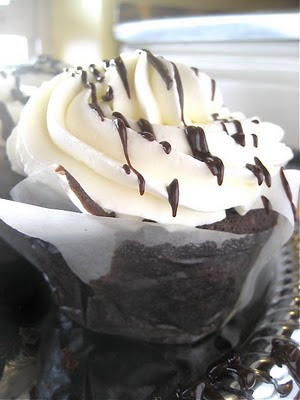 Wouldn't you know it...once the cupcake caper went down, Irene decided to whip out a batch or two of cupcakes. Well, they are selling like hotcakes! Some are filled with carmel, some with chocolate. The ones I made today are filled with whipped cream and a few of those I topped with chocolate ganache, channeling the days of eating hostess cupcakes for lunch every day in 7th grade. It's crazy how people go crazy over cupcakes. It's a phenomenon that's been scorned by many. I understand....I, too have resisted the hype of the cupcake. But they sell...and now that I think about it, they have a pretty good shelf life, especially if they are filled AND I don't have to cut them. So, there you have it, cupcakes it is!
Now crazy people, that's a whole 'nother form of acceptance that we came to pretty early on here at the bakery. Every year has it's cast of characters and for some reason they really come into their own around the end of January. A big part of opening a place like this is that, while you fantasize about those cool customers your going to attract...and don't get me wrong, alot of them are WAY cool, there is still going to be the little assortment of truly wacky people who decide you are they're new best friend. No, we're just trying to be nice, but, oh..it's too late. They're hooked and it's gonna take awhile to wrestle them free. Take the paranoid schitzophrenic dude with narcisistic tendencies. He's writing a book called the 'Illiad and the id' ...can't wait for that one. His Dad used to send me money, to go on an account for him, I'm sure it was so that the money would get spent on food and not drugs, but when the guy started asking me for cash advances against his credit, I had to stop. Last winter it was a fellow we dubbed Andy Warhol because of his thick head of grey hair. He was married and his kids went to school with mine. We would watch with concern as he sat for hours talking to himself, and wondered how his frazzled wife kept him and them all together. Turns out she couldn't and they eventually sent him off. For the most part these folks are fairly harmless, mostly we feel a responsibllity to be there for them, as long as it doesn't interfere with our regular customers. This winter it has been a little less of the really crazy and more of the just annoyingly clueless. One particularly frustrating group of folks is from the local chapter of the Church of the Rock. It's headed up by a couple of guys (I call them the Bible Boyz) in their late 20's or early 30's who come in the afternoons and take up our only four top to swill vanilla white chocolate lattes (um...I'm sorry, but those are some pansy-ass coffee drinks) and grill their younger guests on how much they are sinning. It makes me want to walk up their table and in my most pissed off tone, say calmly "Could you please take that shit somewhere else?" Oh well, I hear they have just embarked on a mission to india, maybe I will be over it by the time they are back, but I doubt it.
Posted by Carri at 3:44 PM

what's funny about this post is that i work at a bakery in the middle of iowa and it's almost the exact same group of looneys. we have "martha" (she looks almost exactly like martha stewart, only wackier,) "the sniffers"(they sniff EVERY PASTRY, even the wrapped breads,) the other day we had a wacko who came back 3 times in one hour for 3 different sets of items and capped it off by jamming her newish vw jetta wagon into a snowbank and blocking up the parking lot! believe me though, this is the TIP of the "wack-job" iceberg and we love them all. whyyyyy do all the weirdos like coffee and pastries.....?

Up until I read this post I hadn't even thought about a cupcake since my dear ol mom had made them for us. It wouldve been a couple of years ago at least. I have been reinvigorated with frosting fervor and am now determined to make some lil tasty treats for dinner this Sunday. Well dessert. You know what I mean.

Evan, you have completely made my week by backing me up so...good to know they are everywhere!
Matt...cupcakes are it...we are still selling them like crazy!