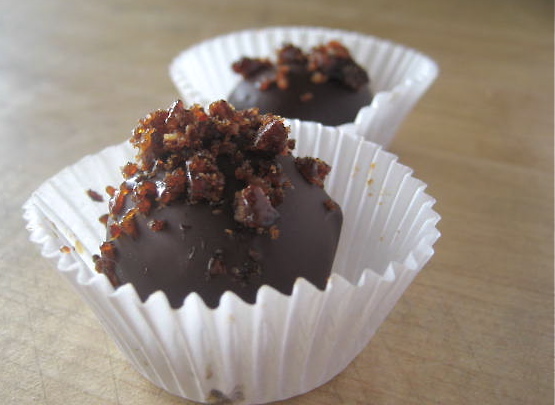 The days are much shorter now, the darkness enfolding our days as the chill moves in and we surrender uneasily into the throes of winter. Snow is starting to stick and people are rushing to finish winter preparations like getting the snow tires on the car and splitting a good supply of wood, oh, and don't forget picking up all that stuff in the yard that will be lost until spring once the snow really falls. The cool weather and impending holiday season make me think of sweet treats...it's time to make candy! Ever since trying bacon truffles out for the first time almost 2 years ago I have made them periodically and they are always an interesting conversation starter, and yes, actually quite popular as well. This year I tweeked it a bit, deglazing the fried bacon with brandy and then making a brittle with some of the bacon for the topping. The brittle sprinkled on top before the chocolate hardens gives them a crunch that really enhances the bacon experience. It is so fun watching people's faces when they encounter something so unusual here in this funky little bakery on the beach at the end of the road. Of course, we weren't the first to think of pairing chocolate and cured pork products. While the blog I heart bacon has references to chocolate covered bacon as far back as 2005, Homer Simpson is credited with being one of the first to herald the virtue of this unusual food pairing. The Minnesota state fair started selling chocolate bacon under the fetching name of 'pig lickers', and before you know it, specialty chocolate shops on both coasts were pedaling their own versions. Then luxury chocolate maker Vosges introduced a bacon chocolate bar, the now famous 'Mo's Bacon bar' and Zingerman's, the big deli in Ann Arbor, Michigan began serving a bacon and chocolate gravy over biscuits, a dish with roots firmly planted in Appalachia (apparently when cocoa powder became readily available in the late 1800's they added it to their milk gravy as a way of jazzing up this simple low country favorite). These days you can even order chocolate covered bacon from almost any foodie catalogue or try a bacon infused chocolate from one of those fancy shops in the mall. With or without bacon, chocolate is enjoying a very real and sustained surge as a versatile, nay even 'healthful' food. I, for one, am and always have been a big fan.
Posted by Carri at 10:55 PM

Okay, Carri! I will try to make a batch before Thanksgiving! I loved 'em last time. I love your new touches!

Friends were mystified and delighted when I made your last recipe!

Yay, Skip! I'm excited to have you try this new version...I like the brickle on top, especially...more bacony crunch! Let me know how it goes.