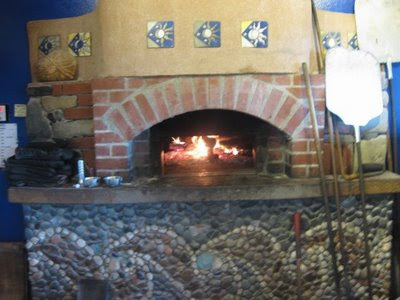 Sharon and Kate discovered Alan Scott of Ovencrafters at a bread bakers conference..we bought the plans,we dreamed about the oven and it's possilbilties, we wanted it so bad that we almost built it before the new building (we'll put it on a trailer!). In the end, it had to wait until a year after the new space was up and running, but we did it! Actually Alan and his dedicated assistant,Julie Lomenda, did it...we offered a workshop and people came from all over and close by ,too, to help and learn from the master himself! It took alot longer and, as you can guess, way more money...$10,000 in 2004...than we thought. it has been an amazing learning experience and has brought us all together in ways we didn't expect. My husband has dedicated himself to the wood gathering, at least as far as the Birch is concerned...we burn a combination of Birch kindling, which grows in patches on the lower peninsula and has a short lifespan, so needs harvesting with regularity, and Alder, it grows in abundance along the roads and is constantly being cleared by the highway department, cut into 3- 4 foot poles which we put on top of the vigorously burning birch to create a hot and long-winded fire. We are currently firing in the afternoon and heat soaking until early morning. It is a retained heat oven, so the fire is burned down to ashes and then they are removed and the brick surface cleaned for bread first, then pastries and on it goes until it's time re-fire. We can put about 40 loaves of bread in it at a time or six sheet pans of veggies for roasting. Cakes and cookies come out amazingly well, as do roasted meats...of course! It took us so much longer to figure it out than we thought, too, which is such an overall metaphor for Bakery life in general! We love it, though, and as we head into fall with so much rain and cold weather, it sure is nice to have a warm hearth in our kitchen!
Posted by Carri at 8:26 PM

This is a great story and I am glad to hear you are enjoying your oven. I've just started investigating the possibility of getting my wife to give me permission to build one in the back yard. I just picked up a copy of The Bread Builders.

All the best,
Jon